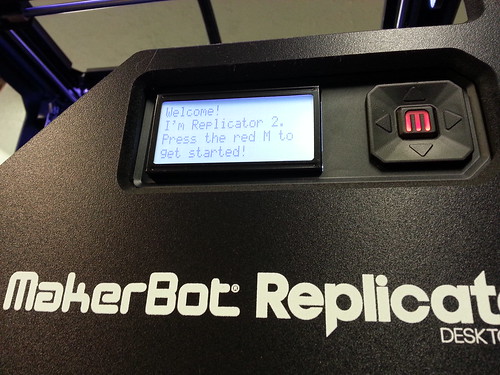 Coal gave us the Industrial age, the age when energy was suddenly cheap, and we could make things year-round in climates that were useless for agriculture. The Atom bomb gave us the Nuclear age, which changed the worldwide political landscape. Sputnik drove us into the Space age, where "the sky's the limit" became a historical in-joke. Then came Internet, and with it the Information Age, the age of ubiquitous, instantaneous communication.

Some parts can't be printed. Chief among these are stepper motors and extruder heads. And these are pretty expensive. So what do we need? Obviously, we need the ability to make stepper motors and extruder heads. Designing a printable kit for automating production of stepper motors from wire, metal dowels and sheet metal should be among the top priorities of anyone pushing hard for 3D printers to take off. Extruder heads are the next step, but I know far less about them...
We need vending machines that print from a catalog of parts. These would be great for dollar stores printing trinkets, hardware stores printing replacement parts, and toy stores printing Lego(tm) knockoff pieces. This is something we have the tech to do now, nd it should take less than a month for a team with a printer, a computer and a payment processor to assemble a working prototype.

And now on to the hard stuff.

We need to build assembly machines with parts bins for memory addresses. They can print parts, store intermediate assembly stages in part register, and do full assembly for complicated objects. Think "CPU", but with physical objects, and with waldo movement sequences for CPU instructions. I can imagine the entire "structured computing" revolution of the 70s applying to part printing and assembling. I suspect much of the work involved will be coming up with standardized part mating interfaces. Lego (tm), Kinex (tm), Erector (tm) and others are all familiar examples of standardized parts mating interfaces, but you'll obviously want something stronger and less modular. Perhaps take a look at what modular furniture is doing, and move much of those kinds of interfacings into automated printing and assembly.

We need 3D copy machines. They don't have to be perfect, and they'd undergo continual evolution. Start with a 3D analog to a silhouette for a first generation. Math geeks, help me out. I'm sure there's a name for that. Second generation would use depth sensing to handle somewhat complex concave models. I don't know what 3rd generation models would be expected to do.

We need to be able to control the color of the extruded plastic on the fly. Existing systems use different color supply plastics, and if you want a different color, you feed a different material. We need a colorless plastic, and we need an extruder head that can mix dyes into the plastic while it's in its molten state, to allow a variance of color during the printing process. Further, we need the ability to recycle printed parts safely on a small scale, and neutralize these dyes during the recycling process.

And now just a personal desire...

I need a slurry pump I can drive using my cordless drill. That would make it trivially easy to clean the snow and ice off my pitted and pocked driveway; just spray salt slurry on it. :)
Subscribe